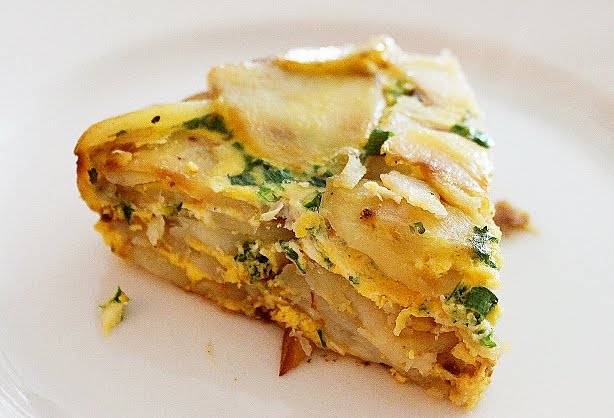 I have been wanting to try a frittata for SO long, but for some reason I always had a good excuse not to make one. Like, say, who has the energy to get up at 7 a.m. on a Saturday and start preparing it in time for breakfast? Or, if my husband hates it, who in the world is going to eat the whole thing with me? And of course, there were the ongoing questions of “is a frittata really a dinner dish?” and “it’s like a quiche, right?” that I was both being asked and asking myself.

Still having no answers to these questions, I threw caution to the wind and decided to just go for it. And boy, am I glad I did! After spending a lazy Saturday afternoon whipping up Joy the Baker’s amazing Potato Frittata for dinner, I sliced into the steamy pile of potatoes, fresh parsley and chives, caramelized onions and bacon, took a bite and promptly melted into a puddle on the floor.

This potato frittata was so delicious, and surprisingly simple! Just thinly slice a few russet potatoes, toss ’em with a little oil, butter, salt and pepper, and bake. Meanwhile, whip up a nice little medley of heavy cream, eggs and herbs, and then wash it over the cooked potatoes in a nice big, straight-sided pan (I used a cast iron pot, but a large casserole dish would also be fine). You can leave out the bacon if you’d like, but I’d highly recommend you keep it for extra “mmm”!

Yes, it’s a little time-consuming for a casual morning breakfast, but this delicious dish is just the ticket to ooh’s and ahh’s if you’re having a nice brunch or a big meal that needs to feed a crowd. It can even be served as an impressive little side dish!

As delicious as it was, my pictures of the frittata didn’t look as appetizing as it was, so Debbie from the beautiful blog Squirrel Bakes gave me permission to use her lovely frittata photo. It looks a lot like my frittata did… just more put-together! Thanks, Debbie – I owe you one! Welcome to The Comfort of Cooking. Easy, cozy and delicious comfort food recipes are on the table. Come on in and find a favorite! Our 700+ reader-loved recipes are always fresh, fuss-free and family friendly. Thank you for visiting! Get Your Free E-Book!