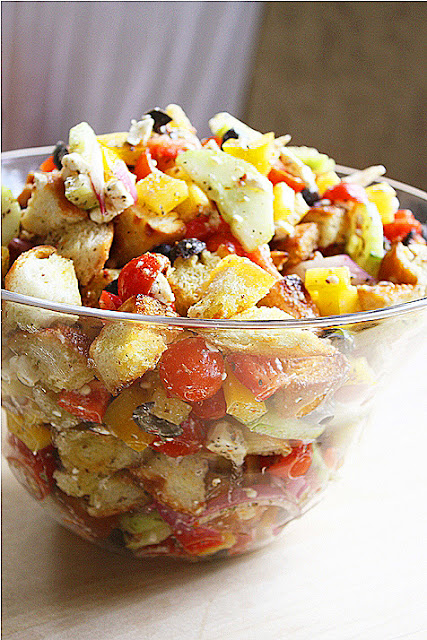 I’ve never been a big fan of salad, but I have a few guesses why: First, I keep my leafy salads pretty bare – no dressing, no fancy extras, nothing at all. Second, I’m too busy focusing on the warm, fragrant main course instead of poking at the leaves on my plate. And third, well, I’ve never made any interesting variations of salad until now.

This panzanella is a truly refreshing treat in terms of salads and side dishes, and I think you would agree. It may have an unfamiliar name, but there are only familiar flavors in this Greek dish, such as fresh cucumbers, bell peppers, cherry tomatoes, red onion, black olives, and a super scrumptious red wine vinaigrette that is a cinch to make! 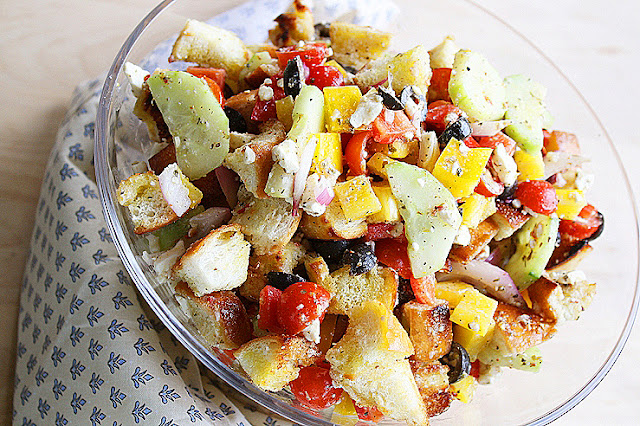 All you need to do is chop the vegetables and cube some day-old French bread. Then, saute the bread in a large pan with some olive oil and coarse salt until the cubes are nice and golden. Meanwhile, make your vinaigrette and keep an eye on the bread. When it’s done, toss those gorgeous browned bread cubes with the veggies, vinaigrette, and some creamy feta cheese. Give it a stir, and you have a colorful and incredibly yummy side dish!

My husband and I didn’t expect to love this salad as much as we did, but it was a absolutely delicious accompaniment to some roasted salmon topped with basil pesto. I really hope you try it sometime, because I know you’ll love it too! Chicken, Penne and Vegetables in a Garlic Cream Sauce